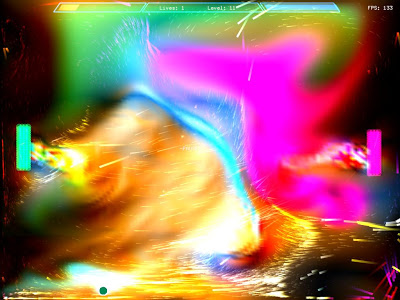 If you are one of those people who thinks D.A.R.E. stands for Drugs Are Really Excellent then Plasma Pong is the game for you. The screen shots are what drew me in and the gameplay is what captivated me.

"PLASMA PONG is a variation of PONG that utilizes real-time fluid dynamics to drive the game environment.

Players have several new abilities that add fun twists to the classic game. In the game you can inject plasma fluid into the environment, create a vacuum from your paddle, and blast shockwaves into the playing area. All these abilities have fluid-based kinetic effects on the ball, making Plasma Pong a fast-paced and exciting game."

The game has three gameplay modes: single player, mutiplayer, and sandbox. The first two are self explanatory, but the third, sandbox, is what really makes this game stand out. In sandbox mode you control a fluid environment adding particles, changing colors, and much more. It’s pretty fun and addicting. Another notable feature of the game is the music, the soundtrack fits the game perfectly and is on of the things that really keeps you drawn into the game.

Overall the game is really fun, but I wouldn’t recommend trying it until you have a good hour to waste.

Plasma Pong can be downloaded here for both Windows and Mac computers.