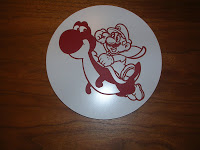 I got bored at work today and decided to make a custom set of coasters. I was originally going to do a set of Mario ones with Toad, Princess, Mario, etc. but then stumbled upon some really old school Mega Man vector files at Dafont.com

Once I got the artwork the rest was easy. I first found a coaster on someone else’s desk and measured the diameter which turned out to be four inches. I then went back to my desk and fired up Corel Draw where I drew several four inch circles and then put a different character at the center of each. When I sent the the artwork over to the laser I bumped up the power for the circles so they would cut out and bumped down the power for the characters so they would just etch in. After they were done engraving I took them to the assembly room and put five little felt circles on the bottom of each one (one on each “corner” and one in the middle). Once the felt was firmly secured to the bottom I tested them out; turns out they actually make pretty good coasters, which is a bonus because I was hoping they would just look cool and really didn’t care how they performed. 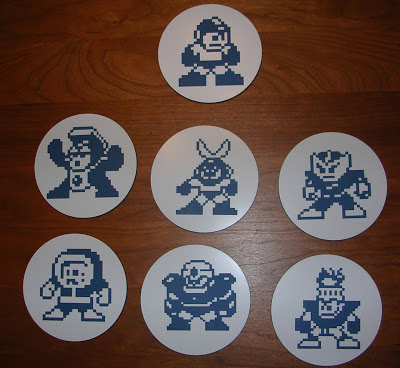 ***As a side note: Also at work today I made plans to visit Adafruit laser etching in New York sometime in late January. Should be a really fun trip especially since Phillip Torrone from Make magazine is the co-owner. Keep your eyes pealed for my write up!