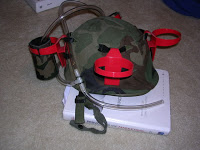 posted on instructables a few months ago):

So during a heavy night of drinking about a year ago I came up with the bright idea of making a beer helmet, but use an army helmet instead of the typical construction helmet. Hungover as all hell the next day that is exactly what I did.

*4 cup holders (I “borrowed” them from the local target that has a starbucks inside. Their idea is to clip these things onto carts to hold your coffee as you shop. My idea is to clip beer to my head).

As you can see there are four cup holders. Two have coozies attached and two don’t. What is the of this purpose? Keggers of course! The front two cup holders are there for solo cups. When you don’t beer in a bottle or can you switch the tubes to the front and you’re good to go. This helmet makes you the macgyver of beer drinking.

Now it’s time to attach the coozies. I used a sharp knife to poke holes in them (three sets in each coozie) and then ran a zip tie through the coozie and around the cup holder.

This is the easiest part. I started by attaching the t-joint to the right side of the helmet (used zipties of course).

From the bottom of the t-joint I ran one but to my mouth, which was pretty short (eight inches at most). Next the top of the joint runs in a straight line to the back left coozie (which can be switched to the front left if there is a cup there). 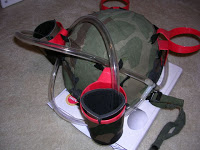 So if you’re like me when you’re drunk you’re:

b) Proned to walk into things

Lucky for me this project satifies all my drunk criteria. I would like to note one improvement which would be adding a tip to the end of the drinking tube (much like you would find on a camel back). This would keep pressure in the system and eliminate a lot of foam issues.

I also wanted to get a first aid cross for it and make it a medic helmet.

Other than that I love my helmet!